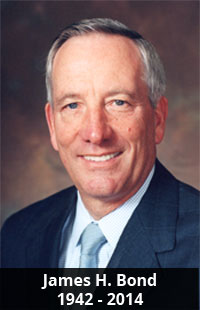 The parking industry recently lost a parking pioneer and industry leader. James Hardy Bond, passed away on July 30 after a difficult battle with pancreatic cancer.

Mr. Bond was born in Chicago on June 2, 1942 and later moved to Scottsville, KY where he attended high school. In 1964 he graduated from the University of Kentucky with a Bachelor of Science degree in Civil Engineering. His business career began with the Kentucky State Highway Department before being called into military service in 1967. Mr. Bond earned his Master’s Degree in Engineering Management in 1969 from Vanderbilt University. Upon graduation, he took a position Commerce Union Bank in Nashville.

Mr. Bond was widely respected in the parking industry, serving as friend and mentor to many in the industry. His sophisticated presence and humble mentality demonstrated his high level of professionalism. As a testament to his legacy, SP Plus Corporation has named its new Nashville operations support office in his honor.

Mr. Bond is survived by his wife of 49 years, Gwendolyn Crow Bond; sons, Paul (and Suzanne) Bond, Andrew (and Libby) Bond and daughter, Emily. He also leaves behind five grandchildren, Alex, Cooper, Lucy, Watts and Jake. He is preceded in death by his father, Eugene Watts Bond, and his mother, Harriet Virginia Harper Bond.

Memorial services were held in Nashville in early August.