Since September, the SP+ team in Columbus has been working hard to raise money so they can treat patients and families who are staying at the Ronald McDonald House of Central Ohio (RMHC) to a special dinner. Through various fundraising events and activities, such as hosting a company 5K run and by playing football squares, the team managed to raise $280 for the meal.

Many employees contributed to the cause, including Alex Morgan from the SP+ Violations Department who said, “It felt good to help out and do something nice for children and their families who are in need of it the most.”

With the money they raised, the team purchased food for the dinner which they hosted last Friday, on October 14th at the RMHC. The menu featured various items such as chicken pot pie casseroles, chocolate chip cookies, and fresh fruits. The entire team, including employees who were unable to attend the evening’s events, began working on the dinner preparations earlier in the day at the company’s offices. Later that afternoon, the team went to the RMHC where they received a tour of the house and learned about the mission and foundation of the organization. The group later cooked and served the meal to RMHC residents.

Based on their experiences, the team said they felt humbled and honored to be able to serve dinner for the families and to volunteer for such an amazing organization. “I really enjoyed being around the families, they were really appreciative,” commented Tyler Hagerman, a Facility Manager at SP+, “Seeing all the work that goes into maintaining the house was inspiring.”

Thanks to the popularity and success of this event, the team looks forward to raising more money so they can host another dinner at the RMHC. 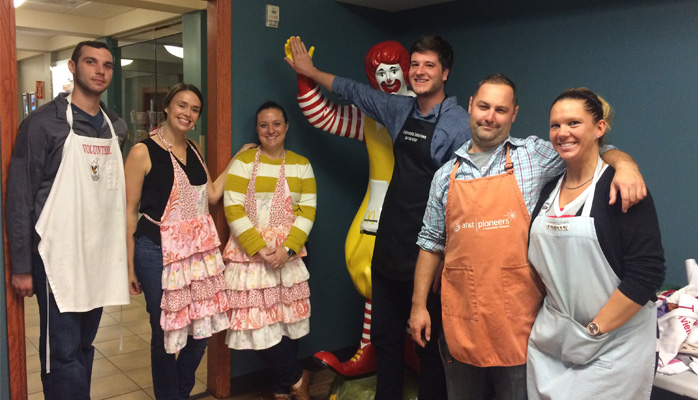