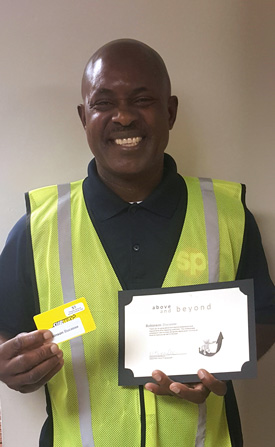 SP+ is proud to recognize Robinson, one of our valet attendants at the Fort Lauderdale – Hollywood International Airport (FLL). Robinson was selected by the airport as one of their FLL Cares: Everyday Heroes, an award that recognizes staff members for going above and beyond when performing their everyday tasks to make a difference in service delivery to airport patrons.

Robinson was nominated by Tawana Russell, Manager of Guest Experience for Broward County Aviation Department. Below is Ms. Russell’s account of the customer interaction she observed which influenced her nomination.

“As I arrived to work this morning, I observed something that made me smile. A young lady was crying as she struggled to push her mother in a wheelchair and pull a large suitcase through the Hibiscus Garage. Robinson Ducasse, employee with SP+ Parking, noticed her struggling and offered to assist. He pushed the wheelchair to Terminal 2, where he could have left them to figure out the rest. Instead, he escorted them into the elevator and up to the ticket counter. I wanted to make sure to get his name, so I followed them up to the ticket counter. The young lady offered to give him some money for assisting, but he refused and said he was just doing the right thing and wanted to help. I approached him to get his name and thank him for what he did. I asked him what made him decide to help since he wasn’t a skycap or worked for the airlines. He told me it wasn’t about the money or working for those companies, it’s about making the customer smile.

Mr. Ducasse demonstrated the importance of the guest experience. Even though he works for parking, he was willing to offer assistance outside of the parking scope. Our goal is to show our airport guests that FLL Cares and this was done through this act.”

We congratulate Robinson on this well-deserved recognition for his delivery of customer service and excellence every day!